Today we did a tour of Nimh Binh. Ninh Binh is geologically like Halong Bay; except the mountains stand on farmland instead of water. A two hour bus ride gets us to the area. Tina booked the tour yesterday evening. This would not have been an issue except for the fact that it is New Year’s Eve, which is big travel holiday, so many of the tours were booked but tour she got us was great.

The tour guide was named “Hi”. This young gal, like Tony in Halong Bay, was from a rural farm village. She lives in Hanoi while working and going to university full time. She is also supporting her two sisters who live with her, another testimony to the industry of the people here.

There was only one other Western couple on the tour. They were from Reims, France. Their limited English and my lack of any French limited the conversation.

First a visit to Hoa Lu, the first capital of Vietnam. The temples are beautiful and the history is, in Tina’s words, almost old testament.

Next we went off on a river tour through some spectacular scenery and also some river caves. The boatmen often paddle using their feet. I cannot imagine doing this for an hour and a half. I also felt much less than chivalrous letting a Vietnamese gal do this for the three of us, so I was compelled to give a nice tip. 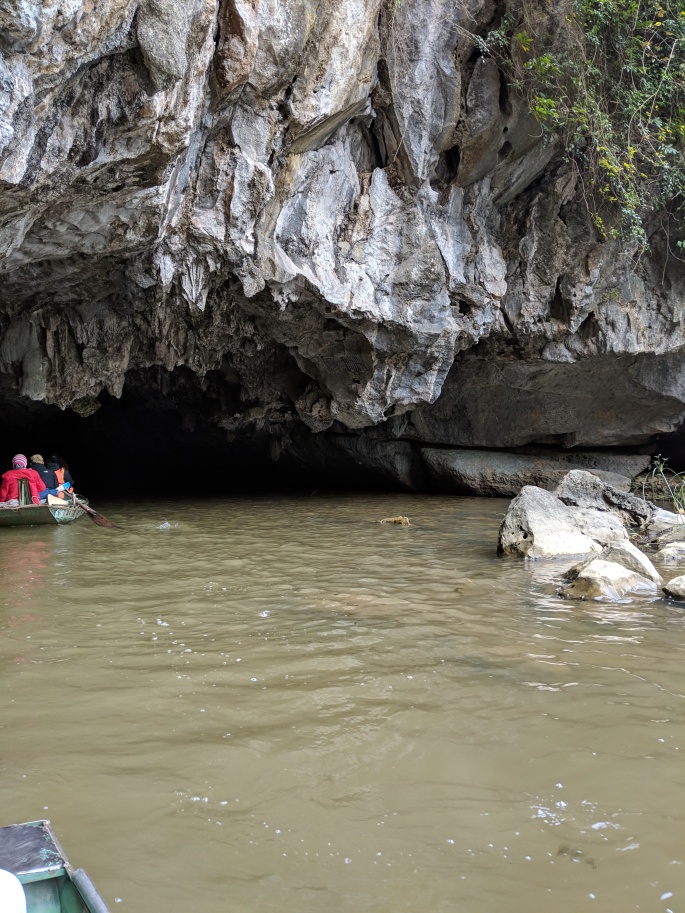 We also had a quick bike ride through the town, which seemed to be an odd time filler in the tour.

Then we had a climb to a shrine at the top of a mountain. 500 treacherous steps. Jim is agile enough for it, I am not.

Then back to Hanoi in the middle of New Year’s Eve traffic.

We went directly to dinner. Jim chose to go to “Chicken” street. He had heard of it from Emma. The food was delicious! Guess what we had… chicken. They must use the white meat for Pho because they only had legs thighs and wings here. And chicken feet, Jim ate a foot.

The traffic back to the hotel was spectacular.

Went to bed before midnight. Happy New year to all.